… of the Municipality Agios Vasilios are part of the two Municipal Units Finikas and Lambi. It ranges from Rodakino (west) to Agia Galini (east) and covers the whole southcoast of the Regional Unit of Rethimno. The Municipality contains 26 communities with 52 settlements. The center of administration is situated in Spili and the Municipal Council contains 21 delegates. The population census of 2011 revealed 7.424 inhabitants. In 2010 the Law of Kallikratis gave birth to a new administrative structue of Greece, which resulted in the creating of the nowadays Municipality Agios Vasilios. 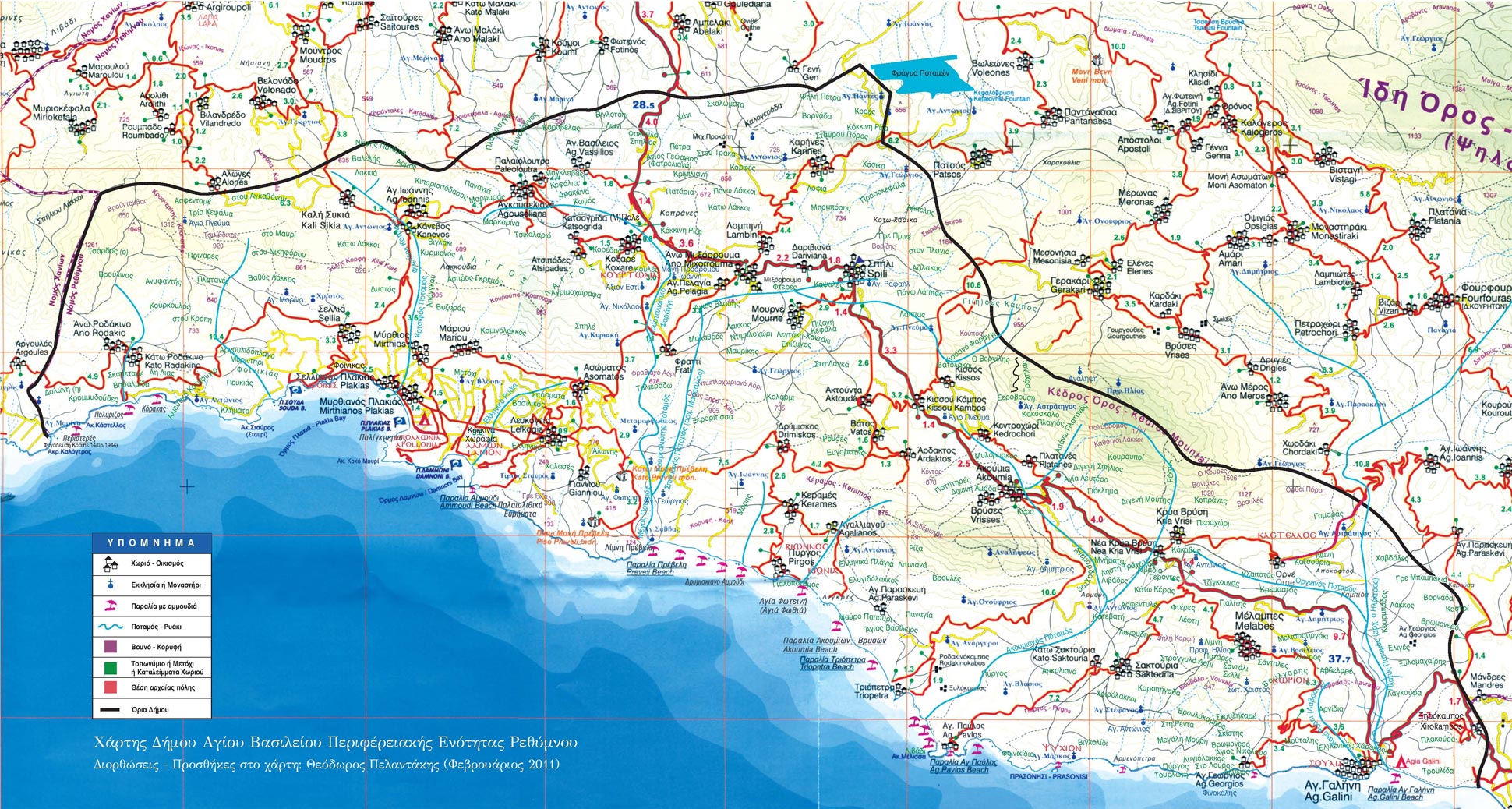 The whole area of Agios Vasilios

It’s location within the district of Rethimno

Kedros (1.776m, situated in Lambi) which forms the foothill of the Psiloritis. In between the Kryoneritis and the Kedros we meet the gorge of Kotsifou and the same-named river (entering the Lybian Sea in Plakias and forming the border between Sellia and Mirthios) followed by the peak of Kouroupa (984m) and the Gorge of Kourtialotis with its river (Megalos Potamos) entering the Lybian Sea at Preveli.

The peak of Kedros forms the border beween the municipal unit of Lambi (eastern of Finikas) and the Municipalty of Amari north of it. South of Kedros rises the Assiderota to 1.162m.

The (rolling) lowlands are caracterised by agricultural use: pure agriculture, cultivating trees (mainly olives) and mixed growing. 45,3% of the area is used by these means and the main growing area is situated in Lambi (Akoumia, Melambes, Saktouria). Another area of growing is situated in Finikas, on a high valley (300-400m), protected by mountains north and south, beween Kali Sikia and Koksare. Even on some high montain ranged valleys there is some growings.

In terms of traffic the area is well developed. The main road axis starts in Rethimno, going south-east passing the Lambi, touching Spili and Akoumia, passing in-between the Kedros and Assiderota and finally reaching Agia Galini. This connection is regularily served by the bus-compagny KTEL. The Finikas and Plakias especially is within easy reach passing either the gorge Kotsifou or the gorge Kourtaliotis. As well Plakias is regularily served by KTEL.

Sources:  Official website of the municipality of Agios Vasilios , Wikipedia