View south to Plakias and the bay of the same name together with Cape Kakomouri, seen from about 550 m altitude; to the left on the hillside you see Mirthios      (©) Andreas Engelhardt

This is a translation from the original german version, as best I was able to do and with the little help of Google translator. So please forgive any error or mistake. And please let me know of any grammatical/orthographical/or other bug. Thanks.

The settlement of Plakias is located on the Libyan Sea, about 35 km from Rethimno. This place is “operated” by the two villages Sellia and Mirthios, which are situated on the mountain. According to the latest census of 2011, there are 325 inhabitants.

The place gives the impression that it has always been equipped with hotels, cafes, taverns, rooms to rent, supermarkets, camping, clubs, post offices, pharmacies, etc.

The name of this place goes back to the sandstone plates (plaka – πλάκα = plate) located in the bay. There is another, though very controversial, theory according to which the name comes from the grave-plates from the early-Byzantine era found in the vicinity of the chapel “Zoodochos Pigis” (at the northern edge of the village between the road to Sellia and the path to the old mill).

Early history
The Plakias of the past was no settlement at all. The bay served as an anchorage for the occasional fishing of some of the inhabitants of the villages of Sellia and Mirthios during the summer months. It housed only one or two huts.

The bay of Plakias has never offered itself as a natural harbor, since it was exposed to wind and high water. Additionally the water depth was/is too small for larger boats or ships. Otherwise it would have been an ideal place for the early development of a large settlement, given the vast expanse of the valley in the eastern continuation of the bay.

The cape at the end of the bay, the Kakomouri or Kako Mouri, has two remarkable holes beside the steep cliff. They are called “gonates” (gonato – γόνατο = knee). Legend has it that the giant Digenes Akritas (main figure and eponym of the most important Byzantine hero epic) knelt down there to drink from the sources of the Megalopotamos (in the Kourtialotis Gorge).

According to recent archaeological findings (see here), there are indications for a Stone Age populations on Crete, which dates back at least 130,000 years. It gives evidence to the fact that sea voyages already took place at that time (the oldest documentary for sea voyages so far refers to 60,000 years BC with the settlement of Australia). In addition, numerous Minoan, Doric, Roman, Byzantine, Venetian, and of course Ottoman cultural remains can be found. No finds, even approximately, are found in the size of cultural centers such as Knossos, Festos, Gortyn, Zakros, Cydonia. Regarding Plakias it can be referred to the ancient sites of Lamon, Appolonia and the Phoinix of Lappas. However, the precise location of those sites has not yet been proven to be 100% reliable since different sources provide different information. 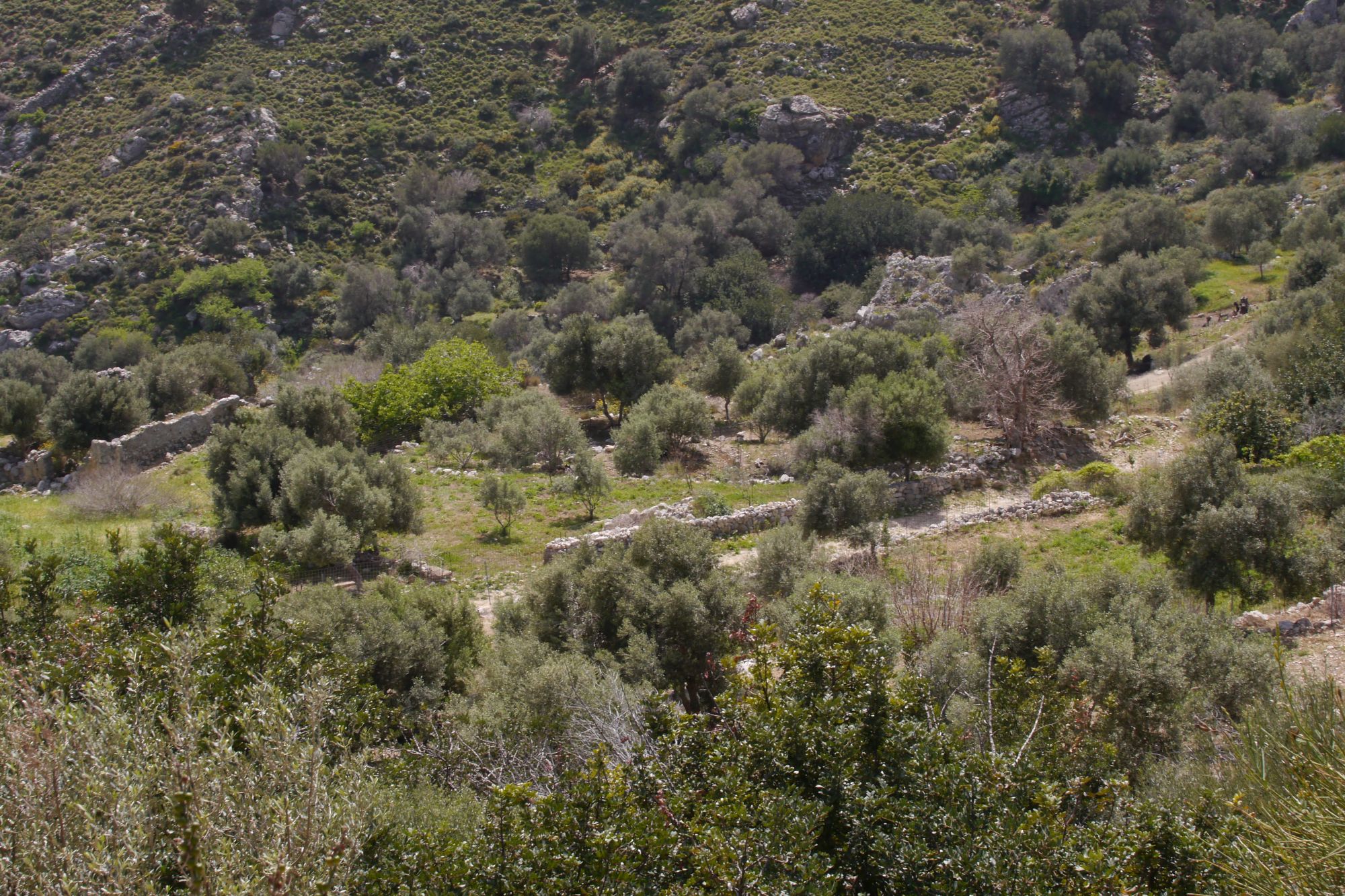 According to scientific researches, the Apostle Paul entered Cretan soil west of Plakias in Souda Bay. He preached the words of Jesus Christ in a village above the bay that is called Finikia.

There are remains of ruins of a fortress on a hill just east of the hotel Alianthos. It was used by the Ottomans as a police station to control the surrounding villages and beaches. It is very probable that the Venetians used this fortress for the same purpose. Said hill is called by the locals “Koules” (it is the word for fortress and is derived from the turkish equivalent “kule”; see also the Koules in Heraklion). Between 1900 and 1904 the building was destroyed by inhabitants of Mirthios to the present remains.

Since the Venetian period (presumably) water mills served the milling of grain for the population of the surrounding villages. Four mills (out of five) in the Kotsifou gorge on the eastern bank of the river were operated from Mirthios (today three mills as ruins are clearly locatable) and the fifth on the western bank from Sellia. The Pigado mill belonging to Sellia was located just above Souda Bay, on the stream that empties into the bay. Even inhabitants of the island of Gavdos came with their boats to mill their grain. Today only ruins of the mills are left (the remains of the Pigado mill are now integrated into a private new building).

More recent history
The history of the settlement of Plakias starts with the beginning of the twentieth century. It is very closely linked to the commercial exploitation of the lignite found south of Mirthios by a German company. As well, it is linked to the fishery at the anchorage of the fishermen, the pier, in whose immediate proximity the building development should then mainly take place.

In 1839, during the Egyptian occupation of Crete (1830-1840), deposits of lignite were discovered. Since the Egyptians had to leave Crete in 1840, they could not realize their plans to exploit the ore and to build a harbor. In 1845 the French explorer Victor Raulin described the quality of the lignite as inferior. The same result was expressed in 1897 by the geologist and paleontologist Vittorio Simonelle.

The coal mining by the German company was operated until 1929. It was extracted from five shafts south of Mirthios with depths of no more than 30-40m. These shafts have now been poured on and can no longer be precisely localized. The coal was transported on a lore on rails about two kilometers to the “Gonates” at Kakomouri, where it was shipped. Even today, the remains of the small pier required for loading ships are still to be seen at the “Gonates”. And those who go there on a dive are likely to find the lore, which had been plunged into the sea by children at that time (1929).
It was this German company that built the first two buildings of Plakias: the “Spitara” (today the restaurant “Sofia”) and a bakery (today’s pastry shop and tavern “Mousses”). The “Spitara” was used as a grocery store and as a canteen for brown coal workers.

As already mentioned, fishing has been pursued only during the summer months, in order to obtain additional income alongside agriculture and livestock production. The unweighted fish was prepared on the spot and eaten in company. The rest were sold to tourists and locals descending from the villages. What remained then was transported on donkeys to the surrounding villages of the former province of Agios Vasilios for further sale.

“Katsouni” was the area around today’s pier. So to speak the “port area” of Plakias or the “old town”. Here the boats lay leashed in the water or jacked up on land. A pier did not exist at first; it was built at the end of the 1950s in a length of 10 meters by cementing existing boulders together with an additional cement platform. In the course of the following decades, the pier was gradually expanded including todays wave breaker.

This “port” never was a port in the sense of secure mooring of boats and ships. It was exposed, especially during winter, to the often very violent southwesterly winds. Thus the boats were either “anchored” at the “Katsouni” or, since more protected, in the Souda bay ashore.
Since 2010, the new and more protected port is in operation west of Plakias on the way to Souda Bay. Tthe construction of it has been funded by the EU

During the time of the German occupation, houses were requisitioned, partly fortified, also fenced and used for occupation policy. In the Mirthios part, houses were used as deposits. There were guardhouses in Mirthios, at the “Gonates”, Damnoni and Stavri (Souda Bay).
During this Nazi rule the brown coal shafts were reactivated. A part of the volume was delivered to the “Gonates” for shipping. The larger part was transported by donkeys through the Kotsifou Gorge. In Kanevos it was loaded on requisitioned and army trucks.

The first building of the settlement of Plakias was built by the German brown coal company at the beginning of the 20th century, called “Spitara”. Today it houses the restaurant “Sofia” In the following years about 10 additional buildings were built around the “Katsouni”, that is part of Plakias belonging to Sellia. As well in the Mirthios-Plakias there has been buidling activities for a handful of houses during the time between the two world wars. These two settlements of Plakias were mainly inhabited only in the summer until the fifties/sixties – the 1961 census includes 6 families living there permanently.
In the course of the still tender tourist development in the sixties (with mainly Cretan and Athenian visitors) an architectural plan study was commissioned by the Greek government for the tourist development of the settlement Plakias and Agia Galini, which was published in 1968. The residential units with capacities for 1,500 to 3,000 beds should be organically integrated into the environment and it should be the modern expression of traditional construction. An integral part of the study was the integration of infrastructural measures both for the tourist part and for the local economy. The residential units were to be built in the area of ​​Paligremnon, that is, at the southern end of Plakias Bay, but also north of the existing Plakias settlement. This plan study has never been implemented.
The tourist development of Plakias started quite smoothly in the seventies and intensified in the eighties. It then proceeded mostly chaotic, with dizzying speed and initially without sufficiently accompanying infrastructure. The responsible villages of Sellia and Mirthios were competing without a joint urban development plan. Only in 1993 the prefecture of Rethimno adopted a plan for urban developmet for the entire settlement of Plakias,  but it was only realized in Mirthios-Plakias.

Development of tourism and infrastructure

At the end of the fifties, the first and very few foreign tourists appeared, the majority of whom were Australians, English and Germans. Similarly, those born in Sellia and Mirthios but living in Athens or Rethimno began to spend their holidays in Plakias during the summer months.

In the sixties, the first hippies appeared, very few, most of them mainly settled in the caves of Matala (east of Plakias and south of Agia Galini). Some also lived among the Cretan date palm trees of Preveli.
The tourist share of the economy of the settlement of Plakias was still quite modest until the beginning of the 1980s, although the number of taverns had increased. In 1973 the Hotel Livikon had opened in Mirthios-Plakias. The above-mentioned chaotic and wild building boom up until the nineties was the reaction to a growing influx of tourists. The once tranquil summer fishermen settlement on “Katsouni” became one of the most important

tourist “hotspots” of the south coast of Crete, besides Paleochora, Agia Galini and Ierapetra.

The infrastructure of the resort developed in response to growing needs of the population, the increase in tourists, their demands and the building rage since the eighties. Plakias was electrified in 1971. Since the end of the seventies it was supplied with water pipes. Up from  the beginning of the nineties there is a municipal sewage plant. Roads were asphalted, extended, expanded.

For those liking to know more about the history of Plakias it is highly recommended to read the below mentioned book of Charis ( Charidimos) Papadakis “Plakias in the past”! You can purchase it in a lot of shops in Plakias.

– Official site of the commune of  Agios Vasilios (http://www.agios-vasilios.gr/)